For more history of the Thomas Center, you may be interested in our book, available now!

Construction for what is now known as the Thomas Center was begun in 1906 as a home for Charles W. Chase. When Chase died, the incomplete structure was bought by Major William Reuben Thomas and completed in 1910. Major Thomas, his wife Kathryn and their five children made the impressive estate, Sunkist Villa, their home for 15 years.  | BACK TO TOP

Major Thomas began his career as an educator and later pursued his other interests which included general merchandising, banking, hotels, land development, retail furniture sales, and politics. Thomas served as an alderman, mayor and state senator. Major Thomas played a key role in ensuring the growth and economic sustainability of the city by spearheading the committee to locate the University of Florida in Gainesville. | BACK TO TOP 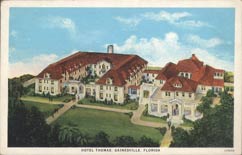 With the addition of a three-story wing, the family home was remodeled into a Mediterranean Revival-style hotel with classical decorative motifs. The Hotel Thomas was opened on January 10, 1928. 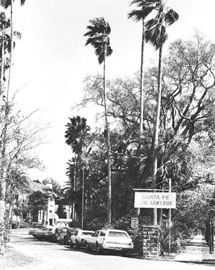 In 1968, the family decided to sell the property. The new owners leased the buildings and grounds to Santa Fe Junior College for seven years while its campus was being built across town in west Gainesville. | BACK TO TOP 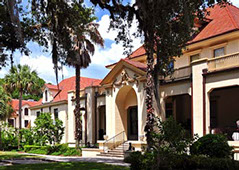 In 1972 when a rezoning request went before the city’s planning board to raze the hotel, the neighborhood residents began a resistance movement. Due to citizen efforts, the site was listed on the National Registry of Historic Places in 1973 and was purchased by the City of Gainesville in 1974.

The original house was restored and designated as a cultural center. This more than one-hundred-year-old building is the setting for two magnificent art galleries, three period rooms and numerous historical exhibits. Its meeting rooms and performance spaces have become sought-after venues for weddings, conferences, and social events. The Thomas Center provides a versatile space which contributes to the cultural, civic and social life of Gainesville. | BACK TO TOP