Virtual Tour of the Period Rooms

Two 1920’s Period Rooms were begun by the Junior League as early as 1975, with stewardship being transferred to the Thomas Center Associates in 1983 to complete and expand. The Parlour/Lounge, Major Thomas’ Bedroom, and his office are the only actual museum rooms designated solely for viewing, while the Reception Room/Lobby, the Lucille T. Maloney Conference Room and the Sam Gowan History Room are designed to function also as much-used public spaces. All reflect Hotel Thomas decor as this was the period to which the buildings were returned in the renovation.

Take a virtual tour of of the Thomas Center by clicking on the rooms below. 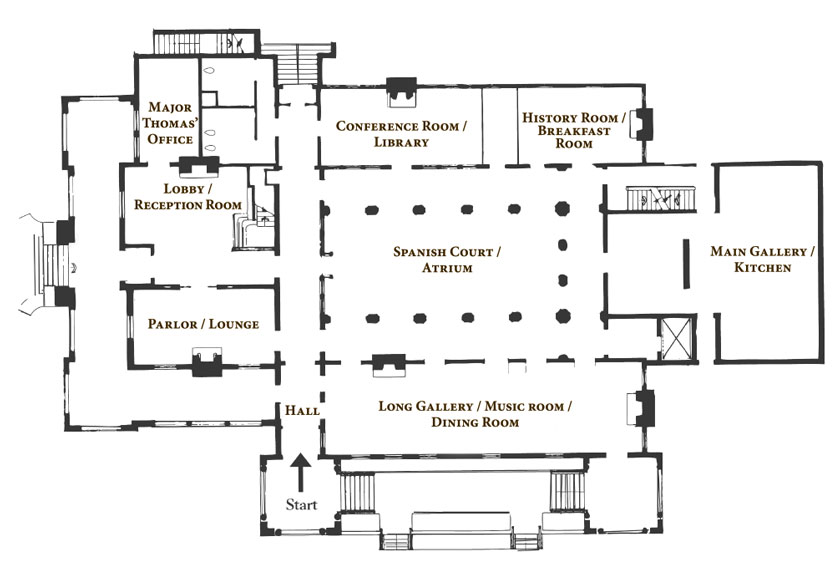 By enclosing a north section of Sunkist Villa’s porch, a private office for Major Thomas and an adjacent main office and registration desk for Hotel Thomas were created. The hotel office and front desk areas were converted to restrooms in the ’70s rehabilitation. The Major’s Private Office has been recreated in its original space as a typical 1920s/’30s office.

The windows in this room are high to accommodate the glass-fronted bookcases, which lined the family library. Later as one of the lounges in Hotel Thomas, the room also served as a place for private parties or salesmen’s displays. Now used as a meeting space, it echoes the hotel period with its 1920s style decor and custom-designed table. The room is named in honor of Lucille Maloney, founding president of the Thomas Center Associates.

In Sunkist Villa, this sunny room was the family breakfast room. Lunch for the children was also served here, delivered from the kitchen of the nearby White House Hotel which was also owned by Major Thomas. For their evening meal, the four boys and little Margaret were bathed, dressed and taken to the popular White House Dining Room. In Hotel Thomas days, overflow guests from the big dining room were accommodated here, as were private luncheon or dinner parties. Today it is used as a meeting space, as the “green room” for performers, and as a staging area for caterers. All the displays relate to the time period in which Hotel Thomas opened. Sam Gowan, to whom the room is dedicated, was the energizing force behind the “Save the Thomas” movement in the 1970s when demolition seemed inevitable.

The photograph hanging near the fireplace was taken when Hotel Thomas was celebrating its grand opening in 1928. Current furnishings reflect this era. The room served a similar function — that of receiving guests ­— when it was part of a private home. The west doors were the formal entrance to Sunkist Villa. During hotel days, they led winter guests to comfortable porch seating, including swings and outdoor activities such as miniature golf. Although the Major’s private office was adjacent, he was often found in the large chair near the fireplace, socializing with his guests. The wall–hung exhibits provide an overview of Gainesville’s history, a brief biography of Major Thomas and some hotel artifacts.

This space is drastically changed from its Sunkist Villa days as a screen-topped atrium. Picture a fern-filled sunken garden surrounded by covered porches. There were little paths and a small pyramid-shaped fountain. It was a favorite play area for the five Thomas children. When it was converted for hotel use, a terrazzo floor was poured. The arches and stucco, which still exist

today, replaced the porch railings and shingle-siding of the Villa. The glass roof was added with a tarpaulin on pulleys to help control sunlight in the new space. During its hotel days, this beautiful room served a variety of uses ranging from dinner on Sundays to parties and fraternity balls. As our Cultural Center today, the room is still much in demand for meetings, performances and social events.

As both a home and a hotel, this space was the kitchen. The unusual ceiling was designed to allow smoke and heat to rise and escape through a capped vent. To accommodate a larger cooking and service area, the hotel’s architects enclosed the wide porches around three-quarters of the original kitchen (note the lower ceilings on three sides). Today’s art gallery offers exhibits that change quarterly and feature visual artists from Florida and beyond. Work in a wide variety of medium is presented.

The typical decor of the 1920s is recreated in this museum room. A fashionable living room — or hotel lounge — might contain a variety of styles which were mass­­-produced adaptations of earlier European and American styles. Favorite indoor pastimes are suggested by the items in the room. This period room illustrates Major Thomas’ philosophy of making his guests feel at home by providing large, inviting public spaces. In fact, some of the family’s parlor pieces, including the piano, were kept when the room was converted to the hotel lounge. When Gainesville “went wet” in 1963, this room took on yet another identity as part of the Cornish Arms Cocktail Lounge. The adjacent porch was enclosed to enlarge the space and the enterprise was awarded liquor permit #1 in Alachua County. It remained in business until the hotel closed in 1968 ­— with the old family piano still in its accustomed place!

Guests of Hotel Thomas usually entered at this door. Registration was at the end of the hall where the restrooms are now. The hall at that time extended to the building next door where the 94 guest rooms were located. Offices for the City of Gainesville fill these guest rooms today.

In the Thomas family home, this space was two rooms; a formal dining room at the east end and a music room in the west half. When Major Thomas altered Sunkist Villa to become part of Hotel Thomas, the dividing wall was removed to create the hotel’s Breakfast Room. Observe that each of the original mantelpieces, like the other four on this floor, are similar but not identical. Each mantel is natural terra cotta, sealed but not glazed. This room is now used for meetings and receptions.

The Major used this large, well-proportioned room as his bedroom when the family moved into the newly-completed home in 1910. Later, when he modified Sunkist Villa and added a new wing to create Hotel Thomas, he “modernized” his room by refurnishing at the same time he was ordering stylish pieces for the new hotel. Family members have shared recollections and artifacts to help the Thomas Center Associates recreate this museum room. The furnishings and their arrangement not only illustrate the decorating trends of the time, they also reflect the Major’s own habits and personal touches, such as the photographs of his parents, his wife, Katie, and other family members. His old cedar box, a family Bible, a comfortable Morris chair and his ever-present cigars help us envision his private retreat at the end of a busy day.

Throughout the school year, third grade classes come for a docent-led tour of the Thomas  Center as guests of the Thomas Center Associates.  This entertaining tour teaches the children about the Thomas family, Hotel Thomas and their role in Gainesville history.  If you are a teacher of a third grade class in any school in Alachua County, you may contact us to schedule a tour for your class.  Email us at thomascenterassociates@gmail.com to schedule a day and time for your class visit.

Twice each year, the Thomas Center Associates provide a special opportunity for the public to tour the Thomas Center museum rooms at no charge.  Led by a docent costumed in 1928 clothes, these entertaining tours inform about the Thomas family who lived in the home, the Hotel Thomas, and the role it played in Gainesville history.  Our next Friends and Family  tour has been postponed due to the pandemic and the closing of the Thomas Center.  Meet in the Spanish Court of the Thomas Center on the tour date.

Thomas Center docents are available to lead tours of the Thomas Center period rooms for groups who would like to learn about the Thomas family, Hotel Thomas and their role in Gainesville history.  If you are a member of a group that would like to have a docent-led tour of the Thomas Center on a weekday, please email us at thomascenterassociates@gmail.com to arrange a date and time for your tour.  The fee for these tours is $5 per person. Groups may pay prior to the tour date by check written to Thomas Center Associates or online.

Enter Building A of the Thomas Center through the doors facing 6th Avenue.  This building was Sunkist Villa and contains the period rooms as well as some city offices.  There are brochures in the entrance hall that are provided by the Thomas Center Associates with the floor plan of this building.  You can use your cell phones to hear  about each of the period rooms. Throughout Building A, you will find signs that tell you how to reach the cell phone tour.